Cat & the Fiddle is an online cake shop that’s founded by Chef Daniel Tay. He was the ex-founder of Bakerzinn and was also the Pastry Chef of French Restaurant Les Amis. Cat & the Fiddle specialises in gourmet Cheese Cakes that are very reasonably priced – starting from $19.90 for a 1kg classic New York Cheesecake to $38.90 for a Mao Shan Wang Durian Cheesecake. Thank you David for sending the lovely box of Cheesecake with 10 different flavours (named Fickle Feline) over. 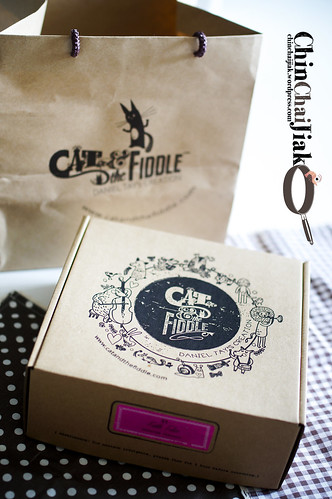 Fickle Feline, as the name suggest, can be a choice for people that are unable to decide which cheesecake flavour to have because it comes with 10 slices of cheesecake of different flavours. However please note that there is only a limited 50 cakes per week and it’s opened for ordering on every Wednesday 10am. 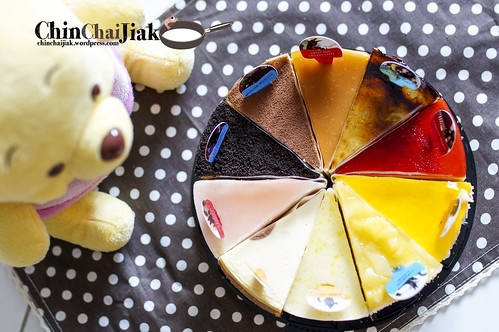 Maneki Neko (Yuzu, Lemon and Lime)
It has a strong refreshing Yuzu taste which is rather interesting and is something that i’d never try before. The top layer is made up of cream infused with citrus flavor with a cheese bottom layer. 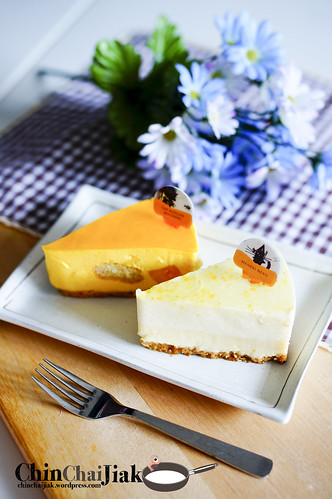 Modern Duke’s Pudding (Oreo)
I am not an Orea cheesecake fan to begin with because it’s too dry and sweet most of the time, but this is pretty well done. The orea crumble layer is rather moist and the moderately sweet Orea goes very well with the cheese and not overpowering another. One of the best Oreo cheesecake that i had. 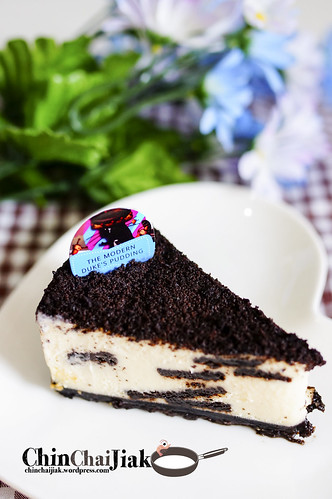 Sicilian Wild Cats (Tiramisu)
This slice of Tiramisu has a light cheese flavour and alcohol taste. The cheese center is very creamy, sandwiching layers of Espresso infused biscuit. This is something that I will go for if i want something that’s not overly cheesy and yet satisfying. 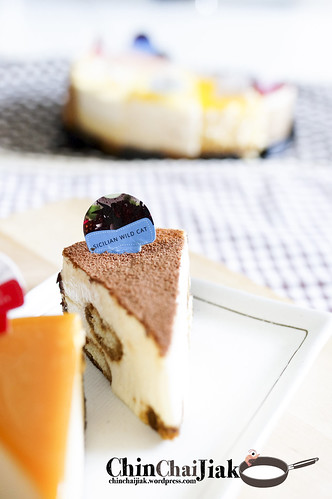 Emperor Romance (Lychee and Martini)
This is very similar to the Tiramisu, but the cheese is mixed with Lychee meat and is infused with Lychee essence. The light Martini soaked biscuit center has almost no trace of bitter taste. This is also pretty light and it’s one of my favourites. 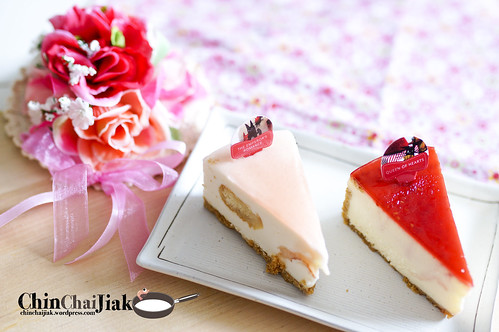 Queen of Hearts (Strawberry)
This cheesecake reminds me of the Raspberry Ice-cream that we can get from the ice-cream paddlers, except there is an added tinge of cheese flavours. The sweetness is just right for my liking.

Caribbean Surfari (Pina Colada)
This pineapple cheesecake has a fruit cake top and the side is sprinkled with coconut shredding that adds on a delightful texture. It doesn’t exactly taste like cheesecake as the pineapple taste seems to overpower the cheese. However taste wise, I have no problem finishing this slice of cake. 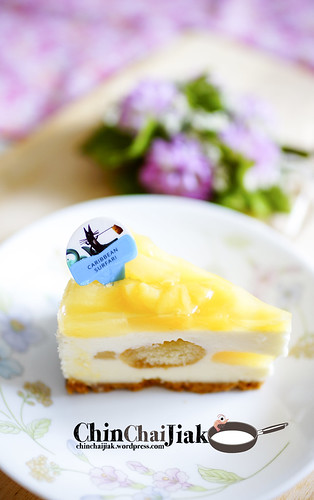 Russian Whiskers (Mango and Vodka)
This cheesecake has a tinge of vodka flavour and the center has a texture of a Mango pudding. 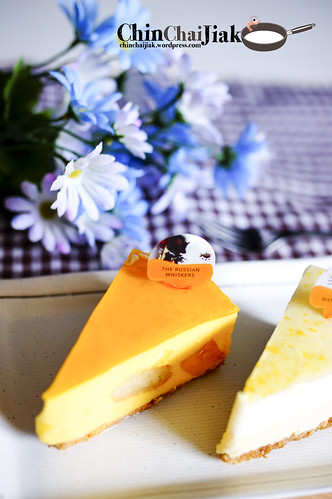 Over the Moon (Classic New York)
The classic cheese cake is not as cloying as expected. It has a creamy texture and not too sweet and it’s to my liking. As this flavour only has cheese and the crust, naturally I will pay more attention to the crust and i thought the crust can be made better, like crispier and more buttery. 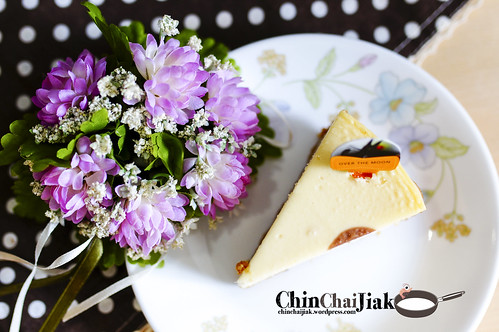 Paws of Fury (Yuan Yang)
Yuan Yang is a blend of milk tea and coffee, but this version has two separated layers of cheesy coffee and tea. I like the coffee layer but the tea layer is not to my liking. Overall i think it lacks the fragrance of a typical cup of Yuan Yang, or should i say, the tea and coffee layer didn’t mix as well as expected. 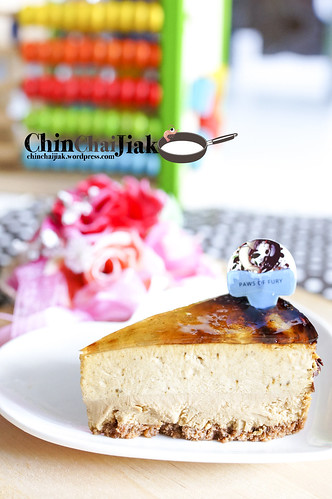 Sweet & Smokey Taffy (Salted Caramel)
I thought the sweetness is a little too overwhelming. Personally I think a sweet caramel is a norm but the bottom cheese layer is too strong to compliment the already sweet caramel. 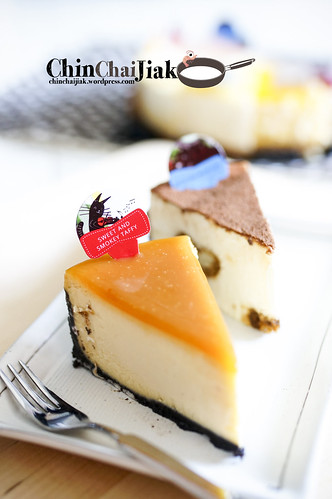 Some of the flavours that Cat & The Fiddle are quite unique and interesting to try. The flavours of their cake are generally milder than the usual ones that we find outside which i think it caters to the taste of our current health conscience generation, except for those that that I mentioned earlier. Among them, my top four choices are the Yuzu, Lemon and Lime, Lychee Martini, Tiramisu and Oreo while the misses are Yuan Yang and the Salted Caramel.

I think Cat & the Fiddle’s Cheese Cake is very reasonably priced for it’s quality if you do self collection or get their normal delivery. I will not opt for the specific timing delivery that cost $26.90 and would rather they deliver the cake a day in advance because the cake can be kept for up to three days in the chiller.

The drawback is they only sell their cake as a whole and there is there is no option to mix the flavours. The Fickle Feline is a choice but there’s only a limited quantity available and it comes in ten fixed flavours. If only i can mix and match and few slices of Mao Shan Wang cheese cake.

I do understand their constrain, which they have to throw away unsold cut cakes at end of the day to keep their supply fresh. However do explore this option, or even swap the ten flavours occasionally, especially if there’s so many flavours to try.

Hin Hollywood Canteen, a very old school coffee shop situated off Tanjong Katong Road, was once a favourite lunch place for “old-timer” city harvest church goers. It was closed down in August 2011 and many coffee shop stalls were missed dearly and one of them is Lian Kee Braised Duck Rice. As per iEatiShootiPost post, Lian Kee had reopened at Sims Vista Market and Food Centre, and had changed their name to Hollywood Duck Rice on 19 September 2014. 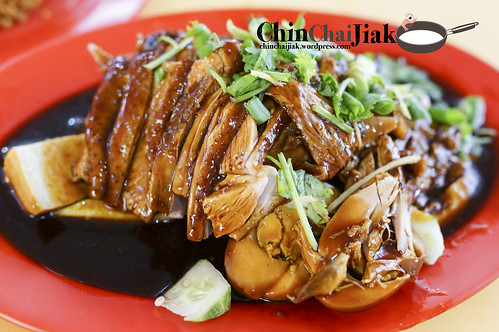 A friend brought me to this braised duck rice stall a few years ago. Although i only vaguely remember the taste, it was quite a pleasant experience then so I specially made the trip down to it’s new location.

I ordered a braised duck for two with added Tau Pok, Tau Kwa and Eggs with two rice. I was rather surprise that it only cost me about $12 for this quality and portion. The dark brown rice is cooked in braising sauce that gives out a subtle herby fragrance that is delectable by itself. Topping it with the thick and flavourful braised sauce only makes the soft fluffy rice even better. 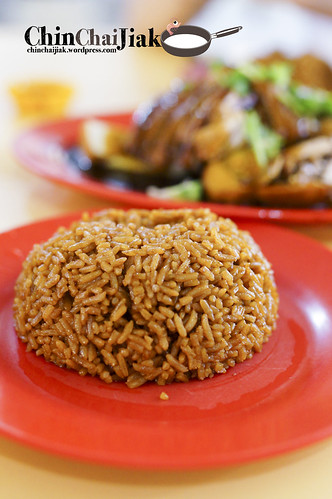 The duck meat is tender and succulent as I remembered it (even for the breast meat), while the flavour infused duck skin adds a slight bouncy texture. This duck has zero unpleasant “duck smell” and is enjoyable to the last bit of meat. Not to mention that the braised sauce has just the right level of saltiness and the thick flavourful gravy is something worth visiting for. 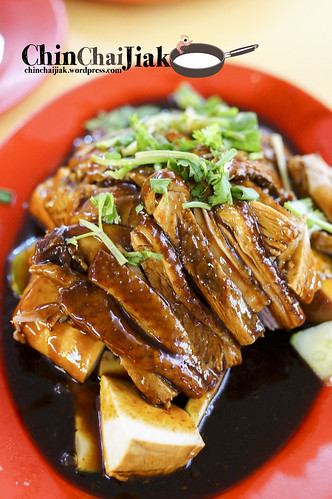 Their braised egg, tau pok and tau kwa are all cooked in the same braised sauce. When the gravy is this good, nothing much can go wrong. The sweet herbal duck soup also works well for me. 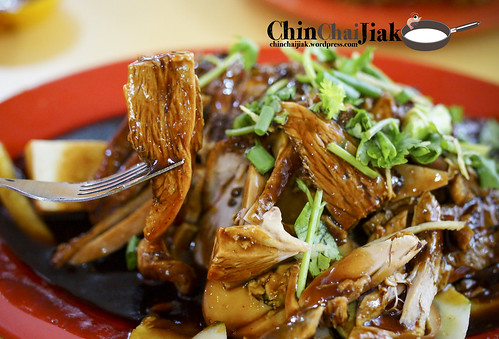 This is a well worth visit. Although it’s at a very ulu location, it’s within a short walking distance from Aljunied MRT. Apart from the taste, i thought it’s very reasonably priced. A plate of braised duck rice cost only $3.30, considering the effort behind for braising the duck and rice. Apart from rice, they also sell duck porridge, noodle and kway chap. 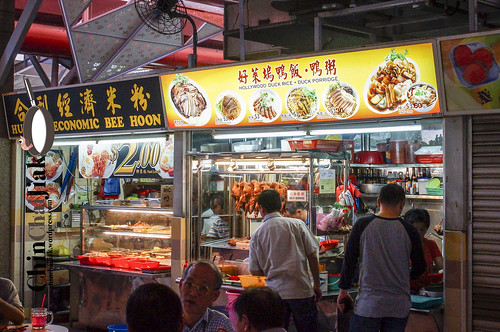 Kin Kin Pan Mee (Handmade Noodle) took Singapore by storm a couple of months ago and it was said that people queued up to three hours for their “legendary” noodle. Kin Kin was originally from Kuala Lumpur and had three outlets under the name of Restoran Kin Kin. It was selling at 7rm (S$2.80) a bowl in Malaysia and it’s best known for it’s pan fried chilli and the half boiled runny yolk. 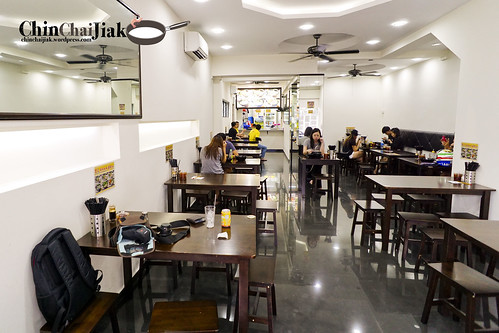 I was here at about 6pm on a weekday and the eatery is quite vacant. It’s actually more of like an air-conditioned coffee shop. There are about sixteen four-seater tables, each with a bottle of their signature fried chilli placed on it. 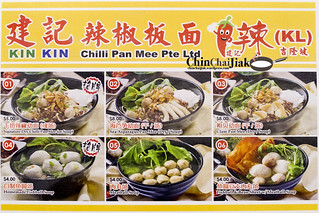 A bowl of dry noodle cost S$5 and comes with a generous serving of braised minced meat and fried anchovies, meat balls and a soft-boil egg. 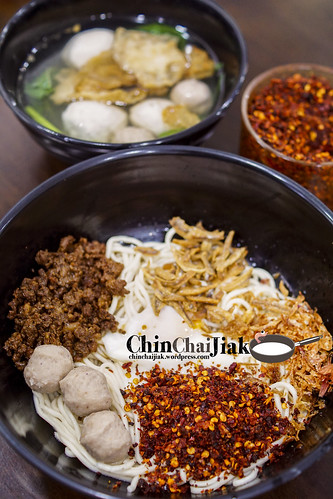 The handmade noodle is not the soft and soggy kind. It’s a little firmer which makes it enjoyable to chew on. Kin Kin also added Pork Lard as part of the recipe, which works out pretty well. 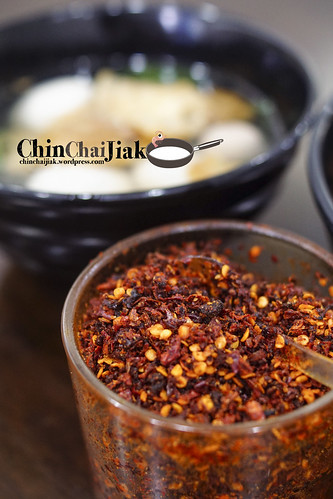 As for their signature chilli, it’s surprising salty, as I was expecting it to be sweeter. If you taste it carefully, it taste like grinded chilli (with seed) pan fried in salt and some kind of chicken seasoning powder ( i thought I tasted Kaka, a kind of old school chicken flavoured tidbits). This chilli therefore enhances the noodle like how a seasoning pack enhances the shaker fries. 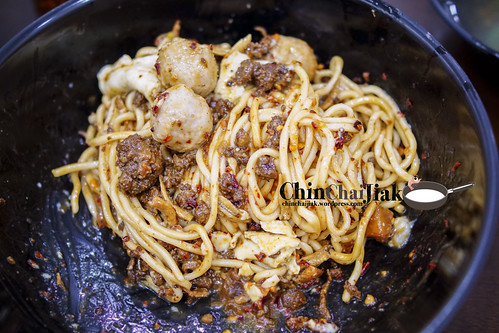 The overall taste isn’t exactly mind blowing but is more of like “kind of nice”. Every mouthful comes in a blend of egg yolk, crispy anchovies, sweet minced pork, pork lardy chewy noodles and strong spicy kick from the chilli. 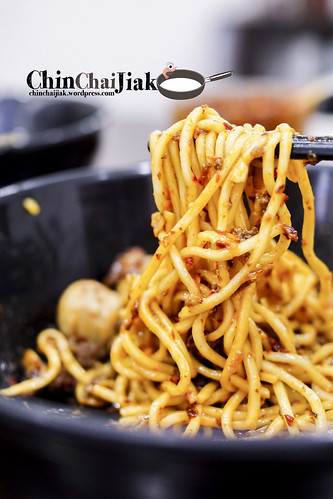 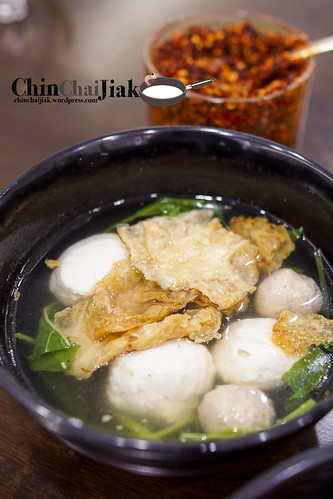 I also ordered their Pork Ball / Fish Ball / Tau Kee Soup. Among the items, their handmade fish ball stood out for it’s unique soft yet springy texture. Unfortunately, i don’t really like the fishy smell of the fish ball (i am a little sensitive to such smell).

I thought Kin Kin Pan Mee is not bad. I like their rather generous topping of fried shallot, minced meat and fried anchovies and the free-flow chilli is a plus. Overall, Kin Kin may not taste exactly “legendary”, like how some claimed it is, it’s still one of the better ones in Singapore. 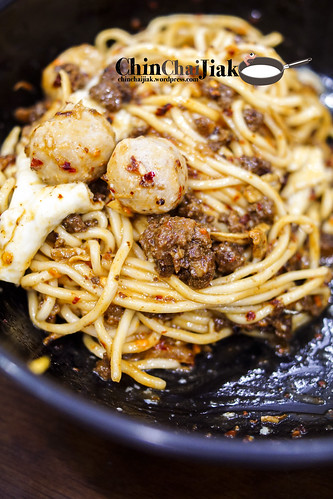 I thought the highlight of Kin Kin Pan Mee is for their chilli so for those who can’t take spicy stuff, you may want to reconsider about making a trip down. 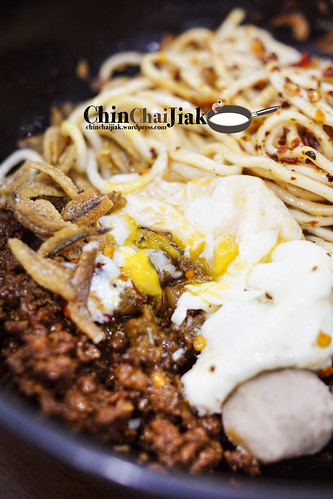 Although i find Kin Kin noodle not bad, i will probably run off to somewhere else for my meal if i know that the queue takes more than 20 minutes. The nearest MRT to Kin Kin is to alight at Tai Seng MRT and take a short 5 to 7 minutes walk. 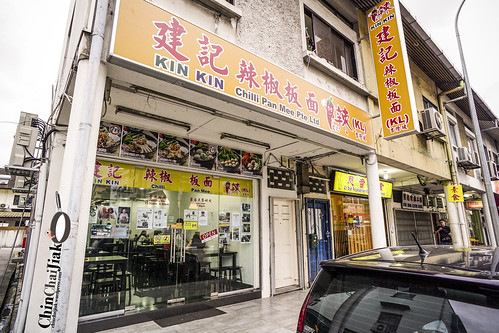