I won’t term Nakhon Kitchen as a restaurant but more of a neighborhood eatery situated in the heartland of Kovan. This place serves considerably good Thai food at an economy price. Each dishes range from $5.00 to $8.00. Some say the food is great, but some said it’s overrated so i gonna it out myself! I visited this place twice, once on 8 August ’13 during the afternoon and a second time on 9 August ’13 during the evening. Both times, Nakhon Thai is crowded and there’s always a queue forming outside the place.

Apparently the best seller at Nakhon Kitchen is the Pandan Chicken, with every table ordering at least one portion. It was sold out during lunch! We only manage to have a taste of this dish on the next day when we came back during the evening. I can already smell the fragrance of spices-infused chicken while unwrapping the pandan leave. Although it’s deep fried, but it’s not dry at all, and in fact it’s really tender. i can see why some customers ordered a second or even a third portion and why it’s sold out.

Like how my friend will normally judge a good dim sum by it’s Har Gow and Siew Mai, i would judge a Thai food place by it’s Tom Yum Soup and Pad Thai, then i realize that there are exceptions. The Pad Thai of Nakhon Kitchen is OK. Not bad, not spectacular, but OK. There’s a lack of the typical fragrance or the “kick” that a Pad Thai has when you munch on them. I thought this is something that i can skip and save my calorie for some other more awesome stuff offered on their menu.

I would really like to mention this Tom Yum Soup. This really really suit my taste as i love my Tom Yum soul to be sour, and it must be spicy, and Nakhon Kitchen’s version got it all. I was not exactly ready for this soup when i took my first mouth and i almost got choked by it’s spiciness. In my opinion, this Tom Yum Soup is gotta be in my top 3 favorite Tom Yum Soup. 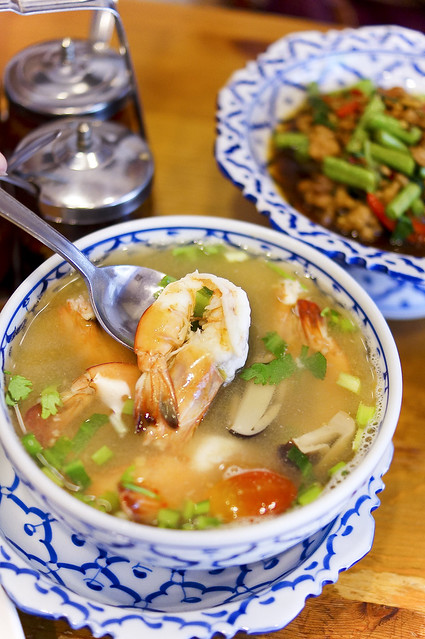 The stir fry pork is decent, taste like a typical Thai restaurant dish. I actually particularly like the long beans which adds an overall crunchy texture to the dish.  Too bad this is not one of the outstanding dishes of Nakhon Kitchen so if i have to choose, i would choose to order other dishes. Don’t get me wrong, it’s just that other dishes are better and i only have limited stomach capacity, and money. 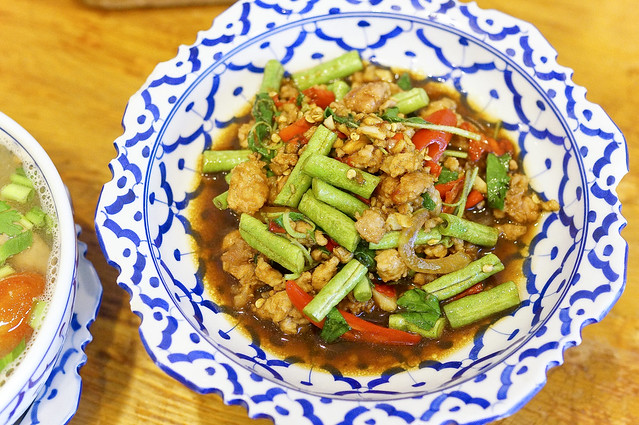 Oh… I like this.  Cashew Chicken. This is a very crispy version with a thin layer of sweet and sour sauce coated over the chicken. Some restaurants offer another version that is actually wetter with loads of cashew nuts but i like this version better.  One of my favorites that comes after the Tom Yum Soup and Pandan Chicken. 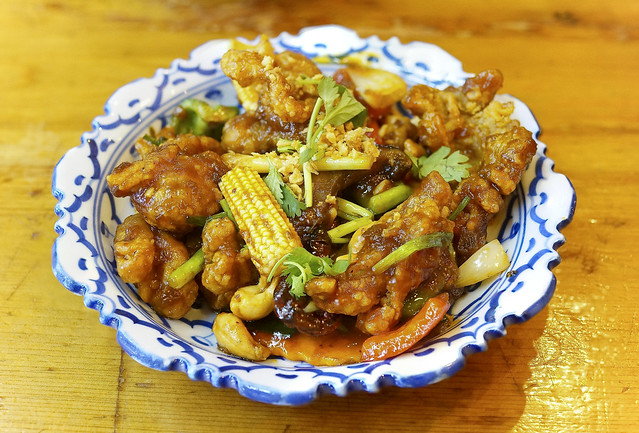 I mistook this for the cashew chicken that was served to another table but who don’t like deep fried crispy pork strips? Actually to be frank, this pork strip is a little bit tough on the teeth, but is really crispy. You can literally hear the crunching sound in your ears when you sink your teeth into one of these. Those who  like garlic will favor this dish because it is so full of it. 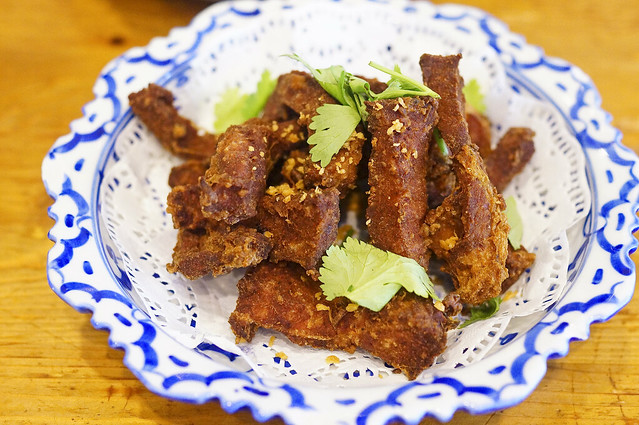 This Kangkong surprises me a little. Chilli is not too overpowering with it’s generous portion of dried prawn and garlic. I particularly like the way the veggies are cooked till it’s really soft, unlike some Kangkong when I had a hard time munching and chewing on them.

Love this dish cus most importantly, it’s not too sweet, and i love the taste of smooth coconut milk and soft Tapioca, and it’s only S$3.00. The only down side is – this dish is really sinful and fattening! 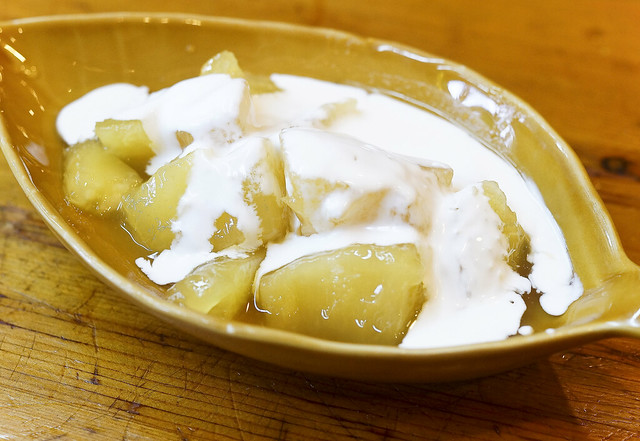 The glutinous rice is actually tasty by itself even without the coconut sauce. Too bad the price is a little expensive (S$5.00) for it’s portion. Can’t get enough for sharing 1 portion.

Apparently i have no problem with Nakhon Thai Kovan branch. I heard from my friend that they served cold dish at the Bedok branch, taste is only so-so, overrated etc. But i am rather satisfied with the overall experience. Despite waiting in the queue, you can place your order first so that your dishes can be served to you soon after you get yourself a seat. Those who live nearby queue up at the take-away queue to save yourself from waiting in the long queue. Initially, I was a little surprise to see their staff allocating only two people to a four pax table. They could have earned more if another couple can share this table. But i think they do have a certain service standard to maintain like how a restaurant will never ask a couple to share a table with another couple. Their service is considerably fast for it’s crowd and price is very reasonable for it’s quality. I can see myself going back to this place soon.