Tori King = 鸡王(Chicken King). The founder, Keisuke Takeda, was once selected as the top ramen chef in Japan and crowned as Ramen King. We can easily identify this place by the queue forming out the restaurant during dinner. No reservation is allowed so just be prepared to queue, especially during dinner time.

Like Ippudo ramen at Mandarin Gallery, seating priority will be give to those group with all members present.

The menu is very simple. You got three kind of soup bases, the original, peppery black spicy, and green Spicy.  The ingredients for the ramen are the same for all the three soup bases. That’s right!! The secret to their great tasting ramen is definitely the chicken soup (鸡 白汤).

After waiting for about 30 minutes for my seat, the first thing that was served in Tori King was the mixed sesame bowl, for me to grind them into powder form, and probably to be added into the soup, or dip it with the chicken. Or maybe they just want to keep me busy while waiting for my ramen. 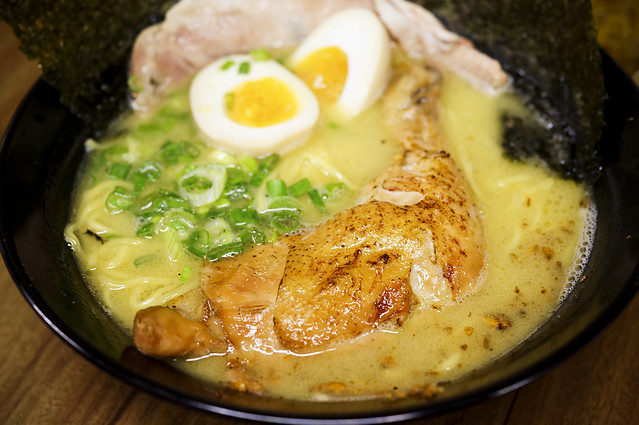 Tori King uses chicken broth unlike the majority, many traditional ramen places use pork broth. In comparison to Marutama ramen which also uses chicken broth, the taste of Tori King’s broth is stronger and much more flavorful. The stock is made from chicken bones, chicken feet, Japanese seaweed and an assortment of vegetables and boiled for eight hours. The original soup base comes with a piece of pork slice, giant seaweed, half boiled egg and the star of the show – the chicken drumstick!

Chef Keisuke said the chicken is boiled for 45 minutes and submerged overnight in soy sauce and is grilled before it’s served. The chicken drumstick is so tender that the meat comes off the bone so easily. A pair of chop sticks is all you need. No fork and knife involved.

The original broth with added black spicy garlic. I got to pay $1.00 more for this broth. I prefer this to the original. I like my ramen to be spicy.

There are a lot of sauces at Tori King – There’s a glass jar containing chilli sauce which there is a written instruction on the wall mentioning that it goes well with the chicken.

Like the Keisuke Tonkotsu King, there’s also free flow hard boiled egg, pepper and bondito flakes available. The mayonnaise goes pretty well with the chicken too, though i am not exactly sure that it’s the correct way of eating it. Remember to sprinkle some bonito flakes into your ramen soup!

For those who prefers a blander kind of soup base, you may think that Tori King’s thick soup broth is a little too much to take.

If you do not want to queue for too long, try to reach this place before 6.15pm and you should be able to get a seat for two quite readily.

Did i mention that that i was quite a ramen fanatic previously when Standard Chartered Bank released a list of top 10 ramen in Singapore and i tired about seven or eight out of the ten, like Noodle Ken at Somerset, Ippudo at Orchard, Santouka and Marutama from Clarke Quay, Yoshimaru at East Coast, Mentei and Baikohken at Raffles Place etc.

In my opinion, Tori King serves one of the best ramen that i ever had till date cuz the soup is awesome! And not forgetting the drum stick. Try it. Now.