When we think of German food in Singapore, we normally do not associate them to the word “affordable” or “homely” but Wilder Mann is one in a slightly different caliber. I was quite surprise when I saw their menu, where most of the dishes are like 30% cheaper than the usual German restaurant and they do not charge GST and Service Charge. Wilder Mann also sets a very relaxing mood in the restaurant especially during at night. 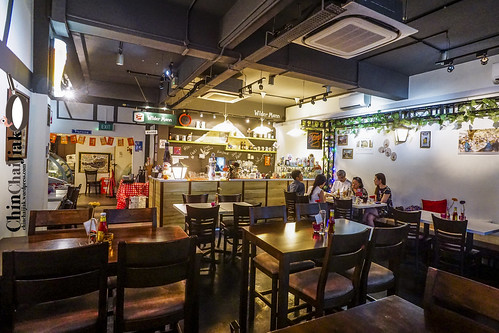 Wilder Mann is recommended by a friend who lives nearby and since they opened last year in 2014, it had became one of her favourite haunt. It is a small locally owned business and the boss is a half German half Singaporean who stayed in Singapore all of his life. Having worked in the F&B industries for years, he mentioned that it has always been his dream to open a restaurant serving food the he loved.

Apart from traditional German food, and after receiving some feedbacks and requests, they also offer a few Singapore-style dishes like the Karate Chicken Chop and Tom Yum Pasta. And of course, don’t forget about the selection of German beer. 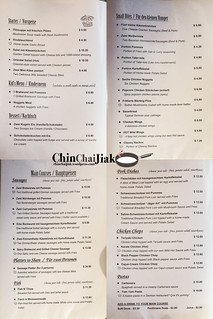 Although this dish is not the most unique, it’s very properly done up as the thinly pounded pork cutlet is well tenderise and flavoured. It has just the right amount of crisp, less the usual greasiness. Their fries are with a good dose of curry powder and this not an adaptation of Singapore flavour, but a way to have your fries in Germany. These fries are really good and I can’t get enough of them. 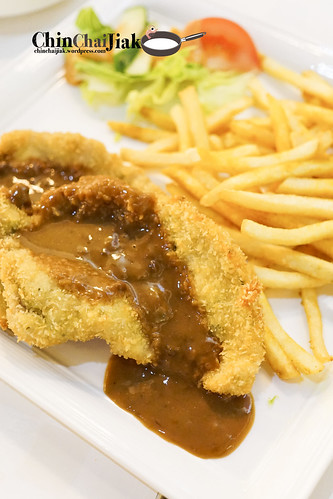 Fleischkäse is a common snack food found in various part in Germany. This loaf of compact pink meat is served in slices and topped with a sunny side up, together with a portion of potato salad and greens. The texture is almost identical to the Spam Luncheon Meat and is very flavorful. The taste is more complicated than our favourite luncheon meat but the one similarity is the salt level. It’s rather salty by itself and I wish I have bread to go with it. I feel that this dish has a lot of potential considering how popular our luncheon meat fries are. Personally, I prefer this as a side dish instead. 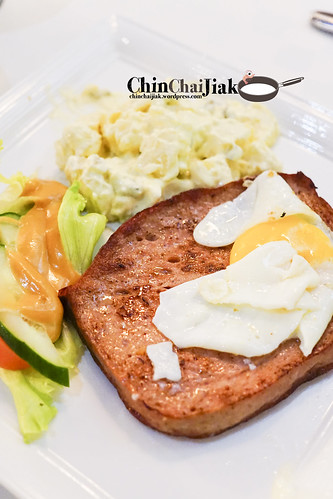 I was quite looking forward to the Tom Yum pasta actually however it didn’t meet my expectation. The taste of the tom yum sauce is actually quite decent but it’s too watery. It didn’t manage to cling on to the pasta at all so each mouthful is a pretty bland and i got to drink the sauce like it’s really a bowl of Tom Yum soup and that is a not my definition of a good plate of pasta. 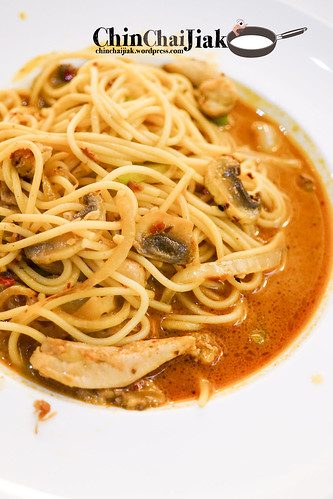 This is the most satisfying dish of the day. It comes with a huge portion of side dish of your choice (potato salad, which I forget to take photo), and six pieces of well-sized German Sausages of various flavours. I’m quite sure the portion is more than what two person can finish especially after taking into account of their side dish. 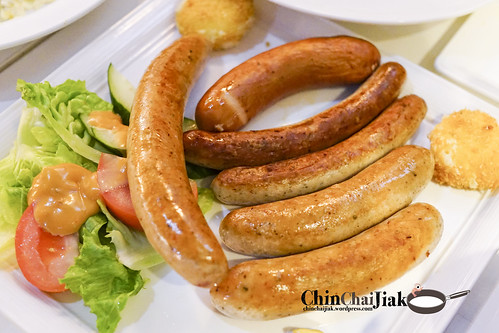 The weird thing is they decided to add in two pieces of cheese bites (one piece per person) in the platter. It’s not a matter of taste (in fact this breaded melted cheese taste really good) but like why? And only two pieces? I would pay to have more of these.

For this dish, i love it initially, then not so much. At first bite, the chicken wing is pretty crispy with a zesty spicy punch. However it became soggy after the breading soaked up the chilli sauce. The chicken wings are quite well marinated though so it’s a pity as it started off quite well. I probably should had finished it quickly when it’s served. 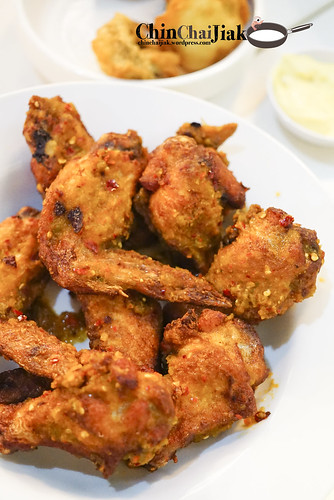 Honestly, this plain looking plate of boiled sausages doesn’t look too exciting at all and I was not expecting a boiled healthy meal whenever someone mentioned “German Food”. This is actually my friend’s favourite dish and she will mostly order this whenever she visits Wilder Mann. The herb fragrance of this sausage is something different from the rest. 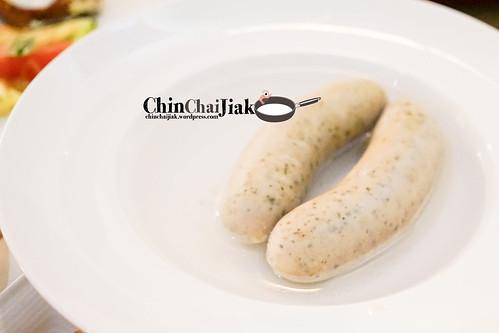 I really like the dining environment of Wilder Mann. Although there is no exaggerating interior design, it feels very homely and relaxing. It’s somewhere that I want to go if I want to avoid the noisy crowd and yet to have a good meal.

Their food are pretty good for some, but there are also a couple of misses. Their dishes are totally not gimmicky and it reminds me a meal of home cooked western food. 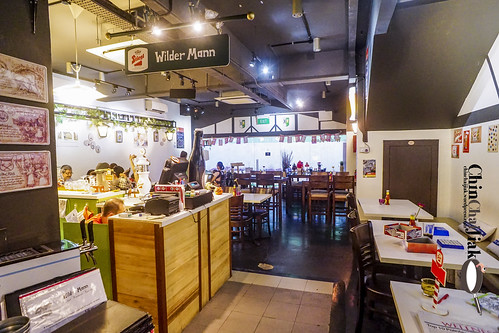 Given the current dining trend, i feel that Wilder Mann will lose out in term of food presentation and having the “Wow” factor. For example, they decided to present their sausage platter and side dish in separate plates. Instead, they can consider slicing some sausages so that it will not look so repetitive, and by serving them on the same plate with a big bed of curry fries which will help in making it looks a little more impressive. 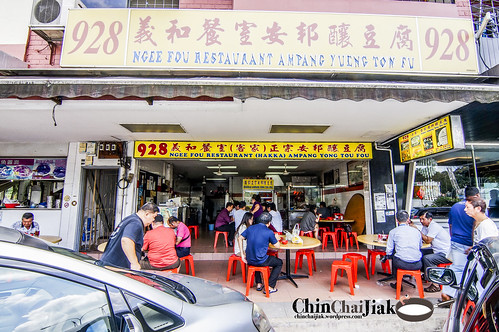 Ngee Fou is situated at the far northern part of Upper Thomson at the Springleaf area and it spans over two shops. Apart from Yong Tau Foo, they also sell drinks, chicken and duck rice. Although it’s location is rather ulu, there is still a pretty decent crowd at meal time. 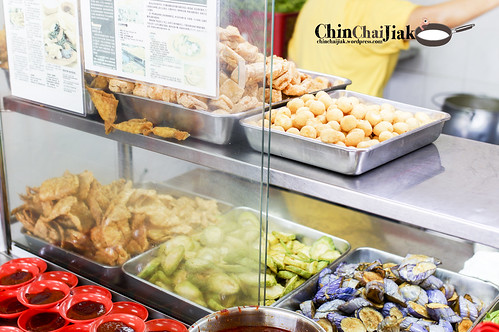 Ngee Fou charges their Yong Tau Foo at an affordable $4 per person and you place your order by stating the number of pax and the auntie will take care of the rest. A portion of their Yong Tau Foo comes with fried bean stick, fried wanton, fried quail egg, fish ball, tau kwa, tau pok, tofu, brinjal, lady’s finger, bitter gourd and tonnes of kangkong, drenched in their secret gravy. 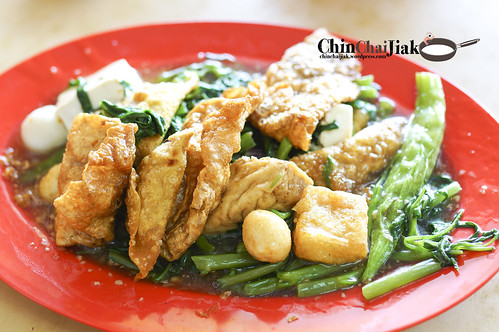 The star of the show is undoubtedly the Ampang Sauce. The secret to their recipe is very well kept and the boss is unwilling to disclose them on various media interviews. It was mentioned that this gravy is made with more than 10 kinds of ingredients and spices. 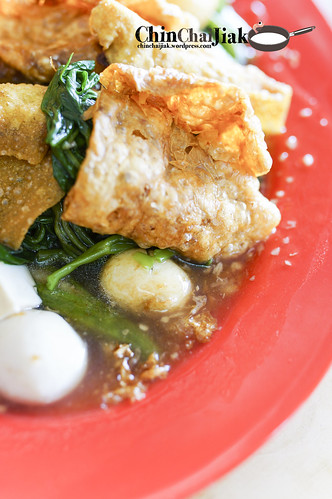 Despite trying hard to analyse what ingredients are used in the sauce, I only manage to figure out garlic and probably flat fish. Their thick sauce is not heavy on the stomach, comes with a slight tinge of sweetness and a decent amount of garlic fragrance, and goes exceptionally well with all the Yong Tau Foo items. 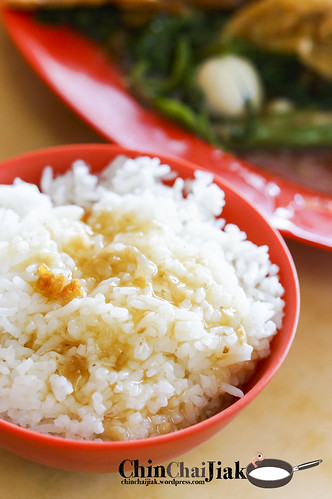 My two favourite items are the fried bean stick and the kangkong. Unlike some bean stick that you find at vegetarian stall which is typically thin and flimsy, this one is well-fried, thick and crunchy. It’s exceptionally good when it’s half soaked with gravy and half crispy. Normally I will sacrifice the bitter gourd and brinjl to exchange for more of these. 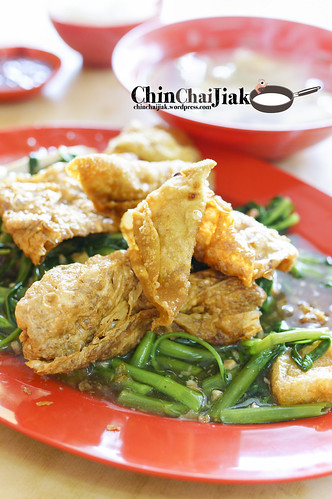 As for the kangkong, they are really generous with the portion, considering it’s only for two person. Usually I am not a fan of non-sambal kangkong but this is one exception. Again, credit goes to the gravy for this lovely combination. The gravy coated vegetable is well boiled, soft enough and yet crunchy and gives a good balance over the fried stuff. 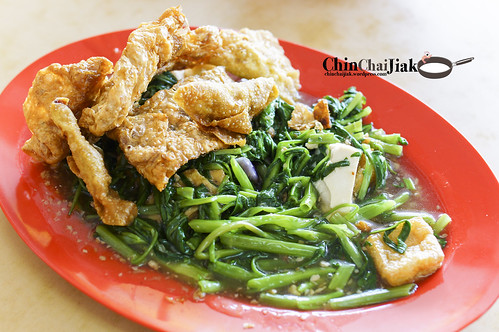 Normally it’s a SOP to order the Dumpling Soup together with their Yong Tau Foo. It’s cost $2.00 for five pieces of dumplings. To be honest, the soup has nothing much to shout about and I’m ordering this for their dumplings as an add on to the Yong Tau Foo ingredient. It’s more of a good to have than a must-order. 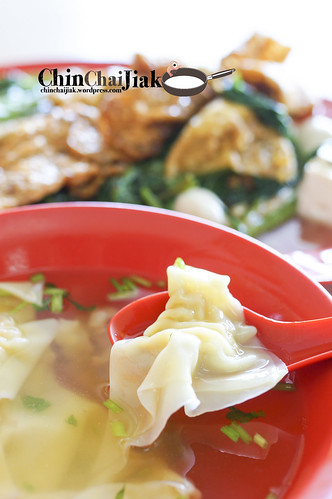 Ngee Fou Ampang Yong Tau Foo is my choice for one of the unique and best Yong Tau Foo in Singapore. Apart from the great taste, it also comes at a great price. At $4 for ten items plus a big bunch of veggie, i consider this as very affordable. Most food court would have charge much more for a mediocre bowl of Yong Tau Foo. I also like the spacious dining environment despite being a coffee shop. The table is well space from each other without the feeling of being cramp up. 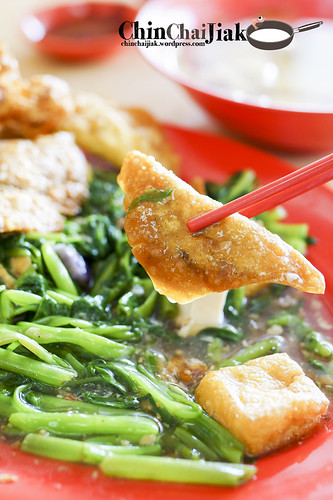 However, due to it’s location, it’s not a place that I will visit frequently, especially for people who don’t own their own transport. But who knows, the story may change when the Springleaf MRT station is completed in the near future. 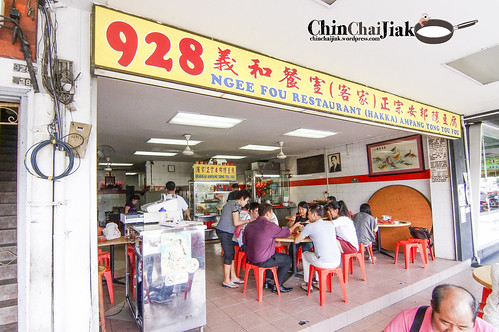