Mala Hot Pot (麻辣香锅) originates from the Sichuan (四川) / Chongqing (重庆) region. It has a humble background and this everyday-dish is widely enjoyed by their ordinary folks. It has gained tremendous popularity in China and eateries selling Mala Hot Pot also started popping up in Singapore’s food court and hawker centre. In3 Singapore’s context, a hot pot refers to a steamboat kind of dish but this Hot Pot actually means Spicy Pot. 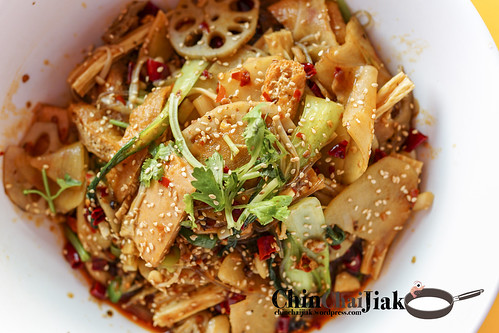 Ri Ri Hong Mala Hot Pot (日日红麻辣香锅) is one of the first Mala Hot Pot eateries in Singapore. It has since gained much popularity and long queues are formed out this hawker stall during dinner hour. The concept of Mala Hot Pot is the diner will choose from a wide variety of ingredients (like our Yong Tau Foo) to be wok-fried in their Mala spicy sauce and to go with white rice. Some common ingredients are pork, chicken, luncheon meat, chinese sausage, veggies, bean stick, mushrooms, lotus root, potato etc. 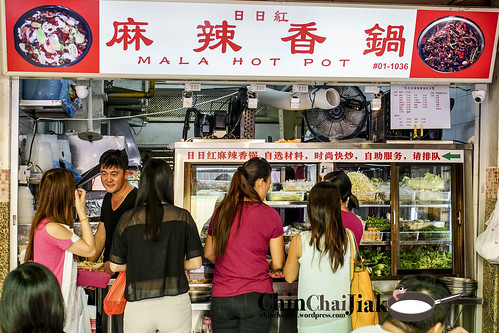 Order at the stall in front, and collect it from stall behind

Ri Ri Hong Mala Hot Pot are well known for the good taste and affordability. Some of us may have seen food court selling Mala Hot Pot and they priced it according to weight (per 100g), which means a moderate size potato can already cost you two to three dollars, which is crazy. Even a piece of luncheon meat can cost three dollars for a thicker slice and you will only know the price after they weigh it. I think those kind of pricing is ridiculous and i never patronise those stalls ever since. 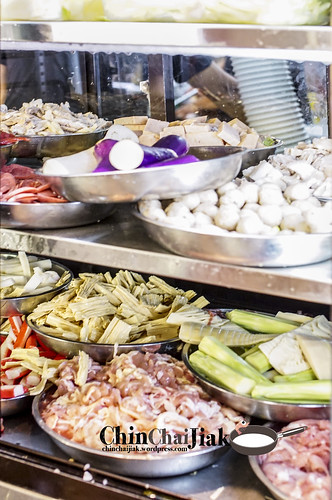 For Ri Ri Hong Mala Hot Pot, you place your order with the stall lady and will be charged by per portion. It’s a dollar for a portion of non-meat ingredient, two dollars for meat and three dollars for seafood, and premium meat like beef, mutton, taiwan sausage and intestine.

The Level of Spiciness 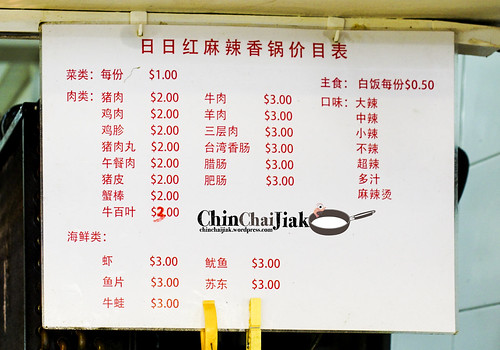 You will then decide the spiciness level, from non spicy, mild, moderate, spicy to extra spicy. For people who can take spicy stuff, the moderate (中辣) is pretty bearable. Probably only the spicy (大辣) flavour will give some kick.

The Hot Pot Itself

The hot pot is brought to taste by some basic ingredients like garlic, red chilli, dried chilli flakes, sugar, spring onion, pepper, sesame, chilli oil and their secret Mala spicy sauce. They claimed that their sauce is made up of more than twenty kinds of herbs and spices. The overall taste of the Mala Hot Pot is similar to Kung Pao Chicken but less sweet and much spicier. I personally like it very much. 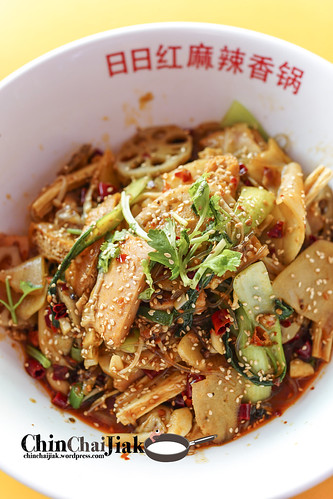 Their thick vermicelli (濑粉) is a must order. During the process of wok frying, these vermicelli absorbs much of the Mala sauce and made them absolutely delectable. I ordered vermicelli, mushroom, lotus roots, potato, veg, tau pok, tau kee, golden mushroom and luncheon meat and it only cost me $10.00, which is good to be shared by two person. If you had other Mala Hot Pot before, you will know that Ri Ri Hong Mala Hot Pot is definitely affordable and very much worth the price. 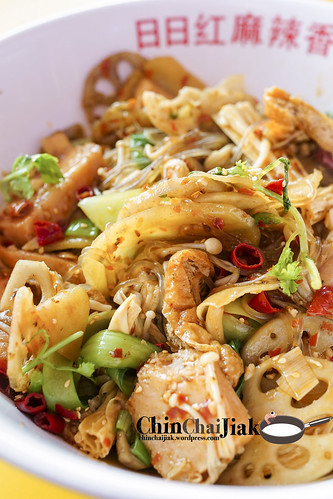 To be honest, I was a little sceptical about this Mala Hot Pot initially as the appearance does not look appealing at all. I sort of mix this up with their cold-stir veggie (凉拌菜) and i am not very into cold savoury dishes. It was the queue that convinced me to try and it was definitely a good decision (in you are into spicy stuff like me).

Do note that it’s a little oily so it’s not exactly the healthiest dish. But Ri Ri Hong Mala Hot Pot will always be in my mind if I happen to visit Chinatown. Now i understand why Mala Hot Pot can be so popular back in China. Cheap, good, shiok and spicy!