The famous Yoogane Dak Galbi (유가네 닭갈비) is in Singapore!

Yoogane, started in Busan in 1981, had since grown to one of the most popular galbi brands in South Korea. Galbi is a kind of grilled dish in Korean cuisine that are made with marinated meat in a ganjang-based sauce.

Yoogane is very popular and well-received in Seoul among the locals and tourists and they have currently expanded to over 100 branches in South Korea. I had Yoogane at Seoul in 2013 and you can read up the review here. 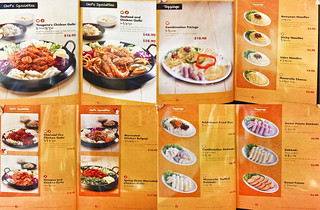 On 1 May 2014, Yoogane opened it’s first franchise brand at our Bugis Junction. For those who are having first-time experience with Yoogane, the dining concept is mainly having their Galbi (pan-grilled marinated chicken) as the main dish, while the customer can add on toppings like teokbokki (plain, cheese, sweet potato), noodles, rice, cheese etc. into the pan to be pan-fried together with the Galbi. 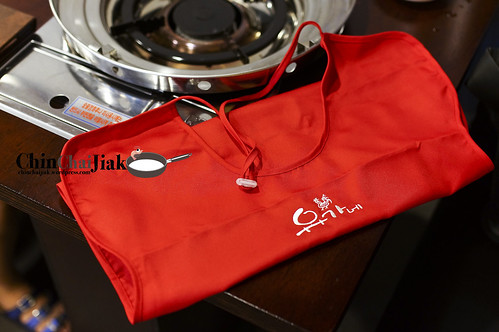 Apron is distributed to diners to prevent splattering onto diner’s clothes. I didn’t see this when i visited the Seoul Myeongdong branch. 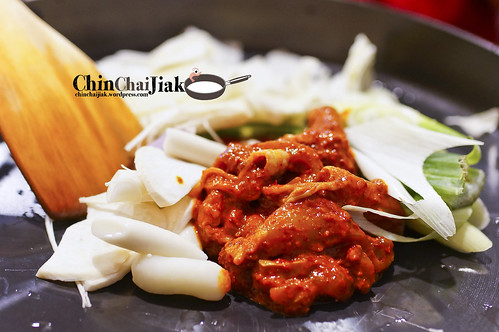 This is the portion for one pax of Dak Galbi with “Combination Fixings $10.90++” topping that consist of vegetables, mushrooms, noodles, 3 types of rice cake and potato slices.

I had a little chat with their operation manager Mark while he’s cooking my Galbi (Yes, their operation manager cooks for customer). He told me that the ingredients used and recipes are all imported from Seoul. He and his partners actually had training in Seoul for up to two months to learn the trick of preparing a good pan of Chicken Galbi. Yoogane has also sent four of their very experienced staff from South Korea to help out during the initial period. He assured me that the quality of their Chicken Galbi is comparable with South Korea’s. 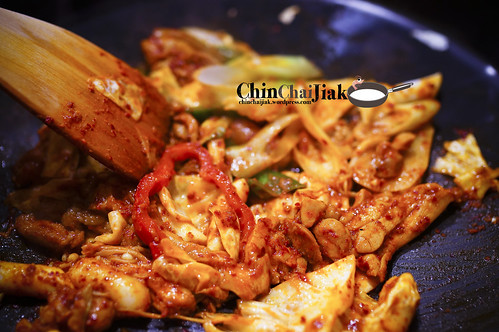 I think i agree with him. The meat is as tender and as well-marinated. The level of spiciness is less than moderate, and it is more sweet than spicy actually. Such taste should be readily accepted by Singaporeans.

The chicken may be the main dish, i actually thought that the more exciting dishes are the fried noodle and rice. 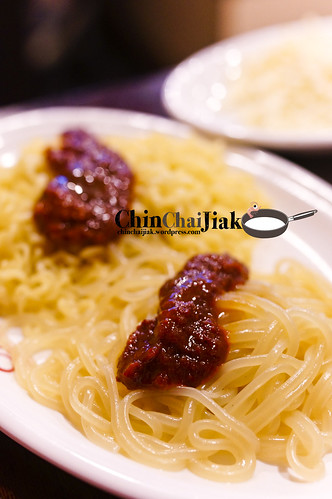 The two types of noodles are already included in my Combination Plate which are the Ra-myeon (Instant Noodle) and the Jjol-myeon (Korean Sticky Noodle). I remembered back in Seoul, i don’t really like their noodle as it’s a little dry. However, i really love the noodle in Singapore. They added water into the noodle to ensure the noodle remains moist while it absorbs the sauce from the pan. I very much prefer the Ra-myeon than the Sticky Noodle. It absorbs the sauce more easily, much softer and has a better texture. 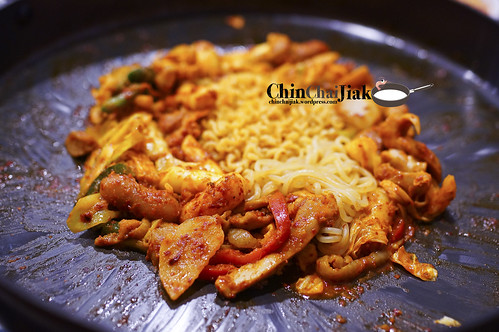 As for the fried rice, it cost S$3.90 for quite a big portion that goes very well with Mozzarella Cheese (S$3.90++). I had been a fan of Yoogane’s fried rice since i had it in Seoul. 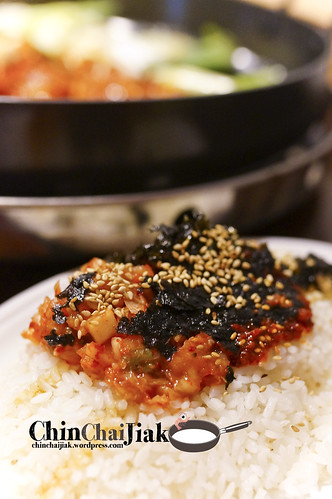 Their staff firstly pan-fry the rice (with seaweed and sauce) till the desired color, ensuring that the rice has been well coated by their sauce.  Then they spread out the rice evenly and scatter the shredded mozzarella cheese on the rice and cover the cheese with another layer of  rice to simmer the cheese. 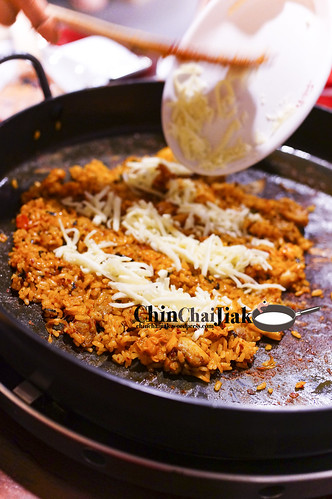 The fried rice is left on the pan for a while and when you noticed that the cheese has melted, it’s time to FEAST! The portion is rather big and two of us sharing one portion of fried rice. 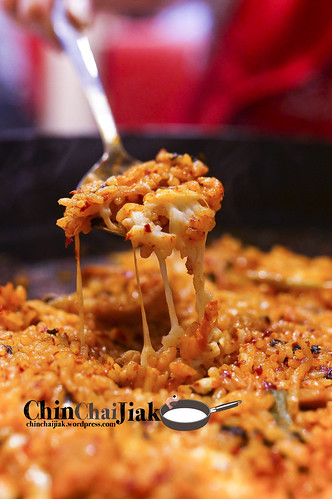 I didn’t have the cheese version of fried rice in Yoogane Seoul so i consider this as a craving well-satisfied! 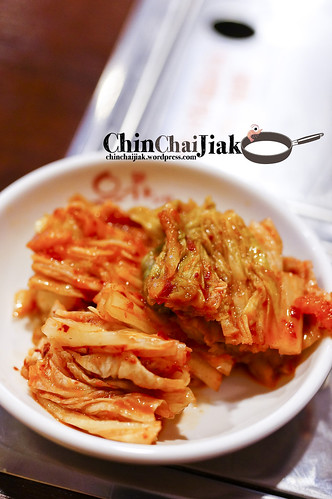 Did i mention about their free-flow Kimchi at the salad bar? Their Kimchi is actually quite good. In fact better than most of the Kimchi i’d eaten in Singapore.

I originally like Yoogane for it’s dining experience, food, and their reasonable price. It’s a pity that the Singpaore price is slightly higher than what i’d expected and the price is like 1.5 times of what it costs in Seoul.  However, I’m still very glad that Yoogane had been brought in to Singapore and the standard is no less than Seoul, and in fact slightly better than the one i had in Seoul Myeongdong.

If you are considering making your way down to Yoogane, do consider that I took about an hour to complete my meal which means the turnover is rather slow. I am someone who love good food, but i hate long queuing time. For me, if the queue is so long as the photo below, i will head off to somewhere else for dinner and probably come back another day. 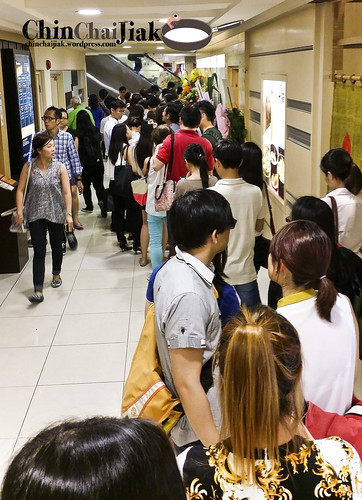 7.00pm – The queue curves to the right at the end, and extends forward for a short distance, then you will reach the reception table of Yoogane.

Yoogane, since 1981, had grown to one of the most popular galbi brands in South Korea. Galbi, generally refers to a variety of grilled dishes in Korean cuisine that are made with marinated meat in a ganjang-based sauce.  Yoogane’s signture dish will be their Yoogane Marinated Dak Galbi (닭갈비). A

Yoogane has a couple of branches in Seoul and i visited one of their two Myeongdong branches. This restaurant can be located very easily, especially the Myeongdong Branch 2, which is only about a couple minutes walk from Myeongdong MRT station. 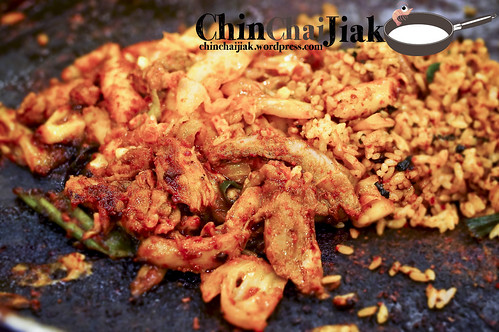 The classic Dak Galbi cost W$8500 (about S$10) per pax which is rather reasonable comparing to Singapore’s price. Refer to this menu for prices of other variations of Dak Galbi: 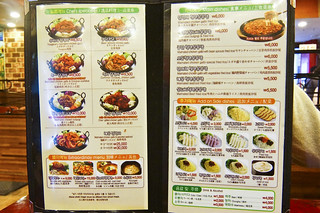 Upon placing my orders, a huge pan (just the pan, as you can see from the photo) of marinated chicken was placed on the stove in the middle of the table. 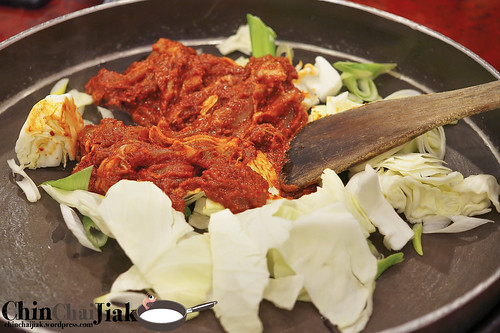 Their supposed spicy chicken is not exactly spicy and it’s more like sweet chilli paste (I have a pretty high threshold for spicy food though). It is pan-grilled on the spot, with aluminum sheet circling the pan to prevent splattering. 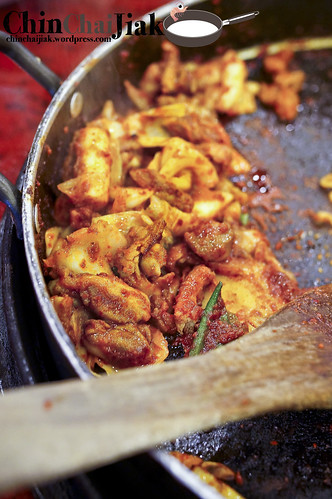 The unique selling point of Yoogane is for their add-on side dishes, that are to be added into Galbi Chicken to be pan-fried together. Side dishes generally range from W$1500 for a portion of rice or noodle, W$2000 for a plate of Mozzarella Cheese, and up to W3000 for a rice cake combination plate. I ordered their fried rice and noodle. 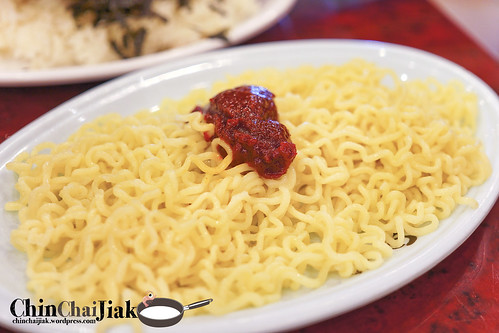 Noodle that comes with their home-made chilli sauce 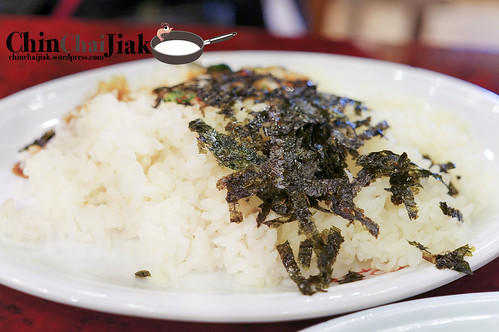 I prefers the rice, mainly because of the seaweed that comes with it! W$1500 for 1 person’s portion

The fried rice/noodle is prepared by their experienced waiter using the remaining sauce in the pan. The slightly burnt sauce coats the rice/noodle while condiments like seaweed or cheese (at a cost) are sprinkled over to complete the dish. 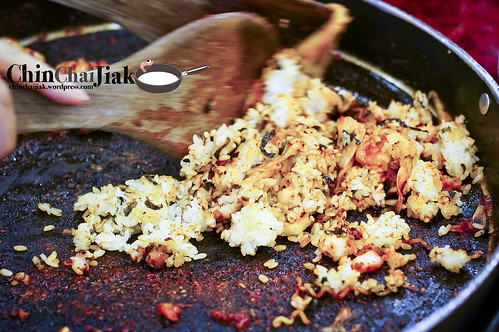 Freshly prepared fried rice. Served within a couple of minutes. 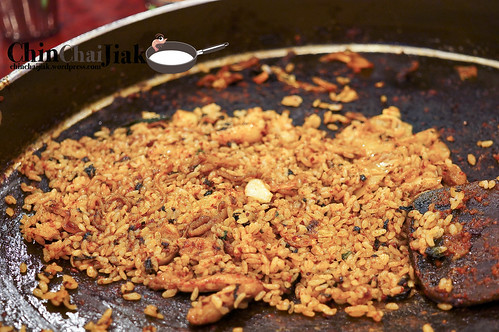 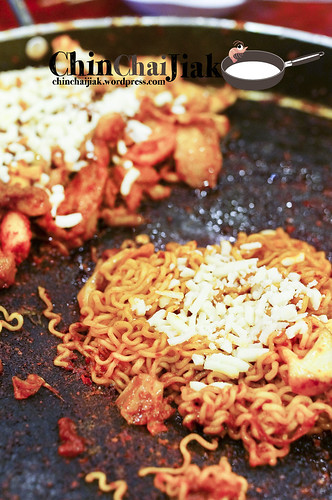 Despite the great online reputation, i thought Yoogane is not the most fantastic chicken that i had in Seoul. Probably it’s a matter of expectation VS reality. However, if i have the choice again, i will probably still visit Yoogane.

Although Chicken Galbi can be found in Singapore, the taste and value of Yoogane’s far exceeded the one i had (clue: restaurant location is near Tiong Bahru). The best thing about this restaurant is for it’s ample space between tables. 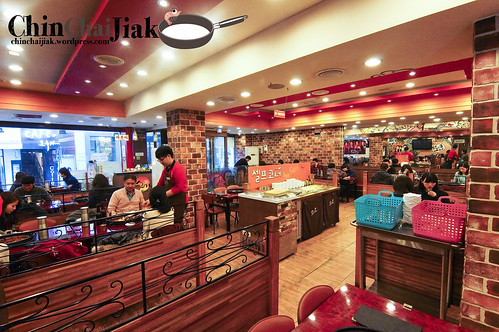 This restaurant is so popular that it opened a second branch at Myeongdong, just a few minutes walk away. I believe there must be a reason for it’s popularity. My conclusion will be – not the most fantastic and unique meal i had in Seoul, but it’s good enough. No regrets.

And Yoogane is coming to Singapore! They are opening a branch at Bugis Junction! So exciting!

I visited their 2nd branch in Myeongdong, that is within a few minutes walk from Myeongdong exit 8. Come out from Exit 8, to your left and walk straight. You won’t miss the shop. 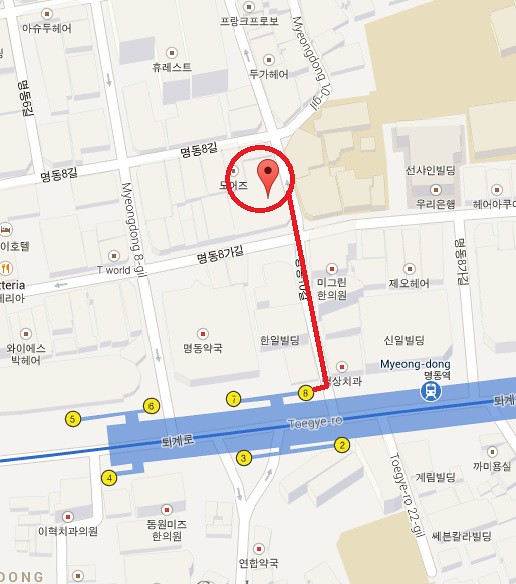 One thing to take note is, you won’t see “Yoogane” on their signage, but the signage will be in Korean “유가네”. The most prominent feature of their signage is for it’s red, orange and yellow logo. Just keep a look out for this and you won’t be wrong: 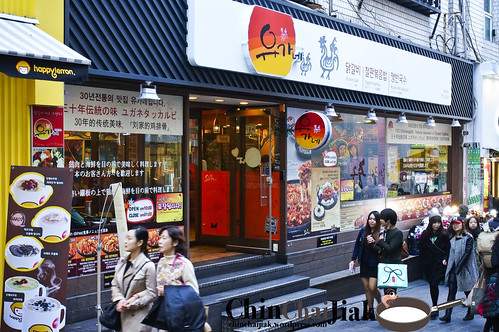 PS: It had been a while that i last updated my Seoul post. I would like to thank miracler for sending me a message, to remind me that there are people who hope to read more on my Seoul posts. This is an encouragement for me to continue. It’s indeed not an easy task to blog on a regular basis, so my respect is out to all food bloggers, and i aspire to be able to blog regularly like some of them. Thanks all for taking the time to read this post!