Opening hours: Mon to Fri approximately from 8.00am to 4.00pm (or till sold out)

When asked for the best hawker stall at the Golden Shoe Complex, this stall 鹏 (peng) Tiong Bahru Wanton Noodle will always come to people’s mind. It’s situated at Level 2 of the Golden Shoe Complex and stands out for the long long queue during lunch time. It comes at $3 and $4 bowl and for a better effect for my photo, I ordered the luxurious $4 version. At $4, I consider this as one of the most sumptuous Wanton Mee in Singapore. 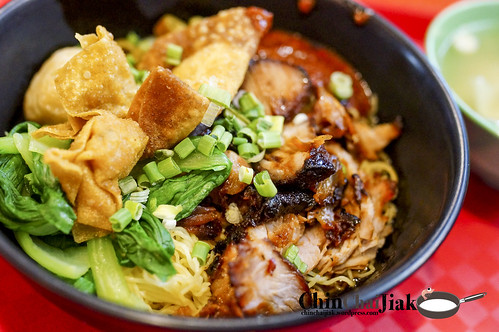 The four dollars version comes with a generous serving of noodle (guarantee to fill your tummy), a good amount of home-roasted char siew, fried wanton, soup wanton, fried fish paste dumpling and a generous portion of vegetable and a fried fish ball. 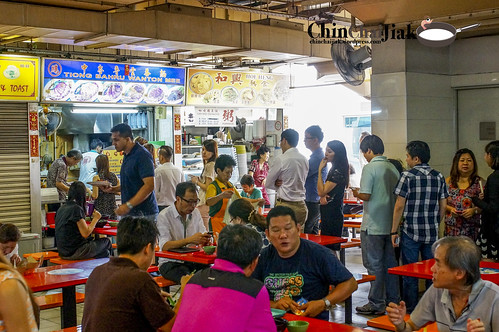 鹏 Tiong Bahru Wanton Noodle is one of the few that roast their own Char Siew. The char siew is well caramelized and those who love charred Char Siew will definitely like their version. They offer mostly lean Char Siew so it tends to be a little dry, but not tough, and I thought it taste a little like Bak Kwa. For fatty Char Siew lover, you can ask for the fat portion (if it’s available) upon ordering. You won’t regret it. 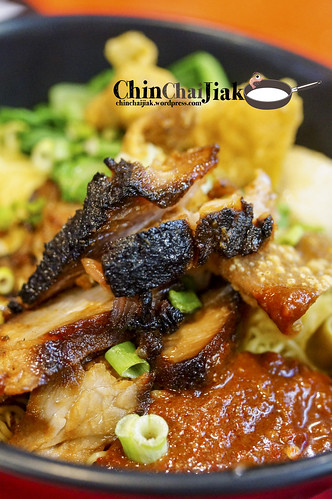 Apart from the main attraction which is their Char Siew, i am pleasantly surprise that their noodle is also pretty decent. The noodle is a little thinner than usual. It does not lump together easily and it’s a little bouncy in texture. It’s lightly flavoured with pork lard and added stir-fried chilli. The skin of the soup wanton is a little too thin and it breaks rather easily, although it does not exactly affects the taste directly.

Peng Tiong Bahru Wanton Noodle may not be the best of the best in Singapore, it’s definitely one of the most satisfying one. At $3.00, it may be the cheapest Wanton Noodle in the CBD area that is worth your calorie. If you are looking for something cheap and good, you may want to consider dropping by this hawker centre within the CBD area. However, note that the average waiting time during lunch is about 15 minutes though. 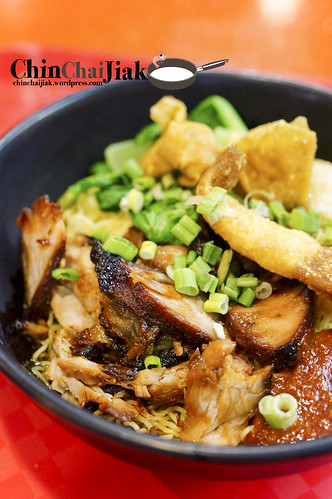